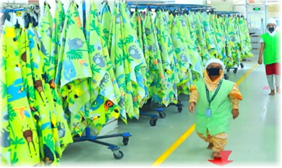 Zaber and Zubair Fabrics Limited is a sister concern of Noman Group of Industries and a giant conglomeration in the same trade which is continuously striving for the wellbeing of mankind. As a part of its corporate commitment to render social welfare activities it has already established Orphanages, Schools, Mosques, and Health Care Service Center etc.

From that mindset Zaber & Zubair has engaged with an agreement with CRP (Centre for the Rehabilitation of the Paralyzed) from where they will recruit physically challenged people.

According to Salahuddin Ahmed, Sr. Manager (Compliance), ZnZ Fabrics Ltd, Since the inception of the journey with CRP Zaber & Zubair already recruited 15 physically challenged people and in the time period from January, 2021 to March, 2022 Zaber and Zubair will also recruit at least 15 people. Here it should be mentioned that all employee recruited from CRP are treated equally with all the human right such as working hour, Wages, Leave etc.