To many people, Spun sizing is an art and that chemistry is a minor and annoying part of that. But what we will discuss today will hopefully lead us to believe that sizing is both an Art and a Science. We will also try to make the Science or Chemistry part of the discussion understandable and enjoyable.

Now that we have defined our requirements for the Sizing, Weaving and Finishing departments in the first part of this article, we can now start to put together our size mix.  Before we put together the mix, it is important to understand the various possible components that we will be mixing together and how their various grades differ. Lets start with the heart of all size mixes, the film formers.

The single largest sizing component used throughout the world is Starch. The main reason that starch is so widely used is due to its cost.  Starch is probably the lowest cost sizing film former in the domestic market today.  In the United States, they most often use corn starch, as that their staple.  However, other parts of the world use different starches for sizing.  For example, Europeans use more potato starch than anything else.  The reason is because potatoes are a staple to their diet and are more abundant than corn.  In Brazil and the lower part of South America, Mandioca, or Tapioca, starch is preferred.  In parts of the Far East, rice starch is preferred.   The various parts of the world will use the starch that is native to their territory.  That doesn’t mean that all starches are equal.  Quite the opposite.  Each of these starches has unique characteristics and certain sizing requirements may warrant utilizing starches that are not common to that region of the world. As most of our denim buyers are from USA or European countries, they often select the types of starch they want to use in their clothing. Even the suppliers are from their country origin.

In addition to the different types of starches, there are also differences within the same type of starch. These differences relate to adjusting the molecular weight of the starch for better viscosity control on the slasher. The differences also relate to chemical modifications of the starch to impart special properties, such as improved flexibility, improved film forming, improved adhesion to polyester, and easier water solubility.  The most common grades of starch are listed below:

The basic and lowest price starch on the market is what is referred to in the industry as pearl or unmodified starch.  This is the pure starch straight from the corn kernel.  It will exhibit extremely high viscosities in solution and will tend to revert to a gel upon cooling. The film properties will show no flexibility (it will crack and splinter upon bending), it will have no adhesion to polyester, and it will exhibit no strength or elongation. This grade of starch will also be difficult to desize in anything but a high strength enzyme desize. 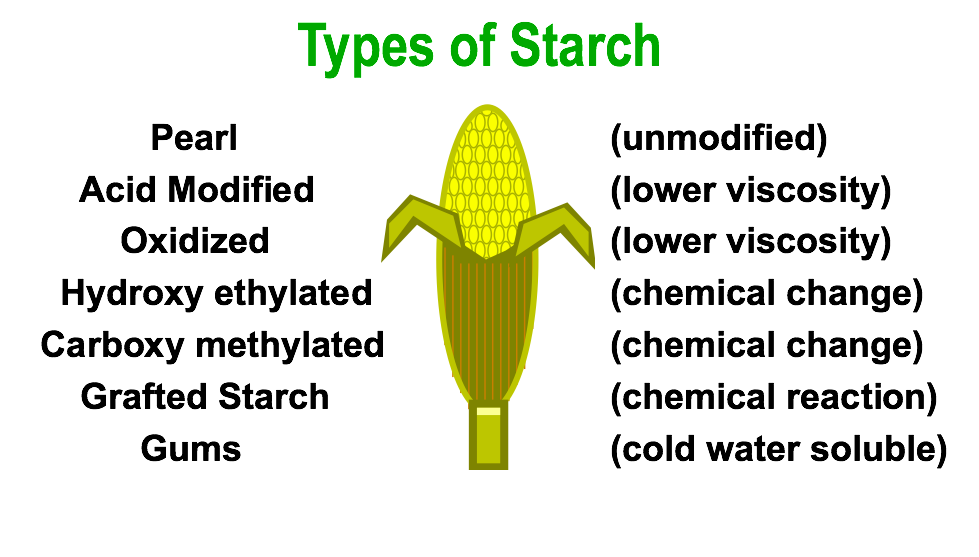 Many mills will not use the pearl starch due to its high viscosity and poor film forming capabilities. That is why the acid modified and oxidized grades of starch were developed. These grades of starch start with the original pearl starch and then this starch is broken down either by an acid technique or oxidizing technique to lower the viscosity of the starch. The starch companies use the term Fluidity to refer to the viscosity of their starches. A 0 (zero) fluidity starch would be an unmodified pearl.  A 10 (ten) fluidity would be a little thinner, but still thick; while a 90 fluidity starch would be almost as thin as water. For those technical in the audience, Fluidity can be thought of in terms of being the inverse of the viscosity. These grades of starch have much better viscosity control as compare to the pearl starch. However, the film properties are only marginally better than that of the pearl starch.

To get the adhesion and flexibility required for successful weaving from a starch product, starch companies developed chemically modified starches. These are referred to in the industry as Hydroxy ethyl starches. These starches are truly chemically modified. They have been reacted with specific chemicals to impart improved film properties. The improvements made by this reaction show up as improvements in adhesion to polyester, improvements to film strength and flexibility, and improvements to film solubility. While the pearl, acid modified and oxidized starches require an enzyme desize to remove them from a fabric, the Hydroxy ethylated starches require only hot water; no enzymes are required for their complete removability from fabric. These grades of starches are commonly blended with PVA to offer a cost-effective blend to a textile mill. 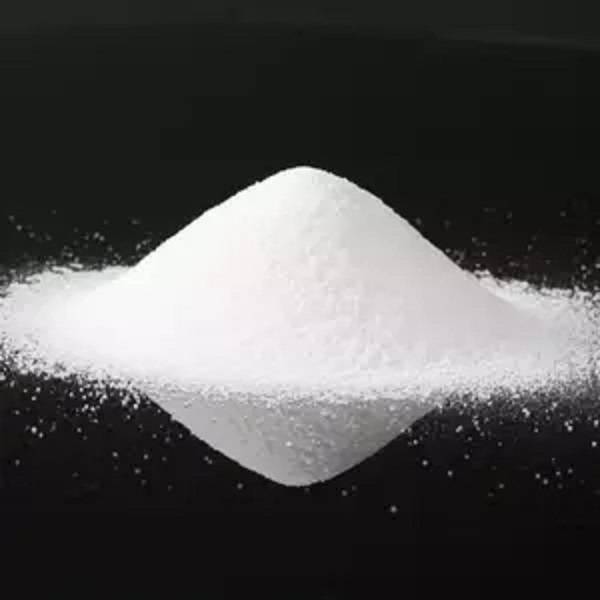 A further improvement to textile starch technology came a few years ago, this technology basically reacts a synthetic polymeric material onto the starch backbone.  What is accomplished here is the production of a starch that reacts as if it has already been blended with PVA (a synthetic polymeric material).The films produced from this type starch exhibit clarity, excellent adhesion to polyester, excellent film strength and flexibility, and easy removability in hot water. Again, no enzymes are required in the desize bath. The true benefit of this product comes when it can be used to replace some, if not all, of the higher priced synthetic polymeric material that would have been used if a Hydroxy ethyl starch had been used in the size mix.

The second largest film former used in spun sizing is Poly (vinyl alcohol) [PVA].PVA was developed for use in textiles as a consequence of the utilization of more synthetic type fibers, such as polyester. As PVA is a synthetic product, its properties can be tightly controlled. The only two significant properties that separate the different grades of PVA are Hydrolysis and Viscosity.

Hydrolysis is related to the level of hydroxyl or (-OH) groups found on the polymer backbone.  Again, there are four (4) basic levels of hydrolysis: Super (+99%), Fully (98 – 99%), Intermediate (94 – 98%), and Partially (86-90%).The majority of PVA used in Textile spun sizing falls in the Intermediate and Partially ranges. 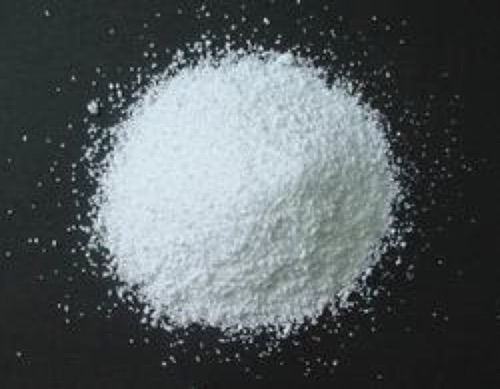 By varying the degree of hydrolysis, the properties of the final PVA also vary. Fully hydrolyzed grades exhibit the properties of water and solvent resistance, strong films, and excellent adhesion to hydrophilic substrates, such as paper and cotton. One of the principle uses for these grades of PVA is the manufacture of coated paper. Low hydrolysis grades are weaker and less water-resistant. They adhere well to hydrophilic substrates as well as to hydrophobic substrates, such as polyester.

Although PVA is well utilized in the textile industry, it has some drawbacks when used in high percentages in a size blend. The major issue is the cost. PVA is more costly than starch. In addition, PVA at times is too good of a film former. What we mean by this is that PVA can form a strong film between adjacent yarn ends resulting in a harsh break at the bust rods. This harsh break could actually promote shedding instead of reducing it. PVA can also “skin” in a size box if the operators are not used to running the product.  It is important to remember that when running a high level of PVA in a size blend, the slasher must always be running, even during doffing, even if in only super-creep speed.  PVA also has a tendency to foam in the size box, especially the partially hydrolyzed grades. This is controllable with defoamer being added to the product in the mill.

Even with its potential limitations, PVA has been shown to be an important film former in the domestic Textile spun sizing market of Bangladesh.

*This is the second part of the content. 1st Part pf the content was published at Denim Focus: July-August 2021 issue.