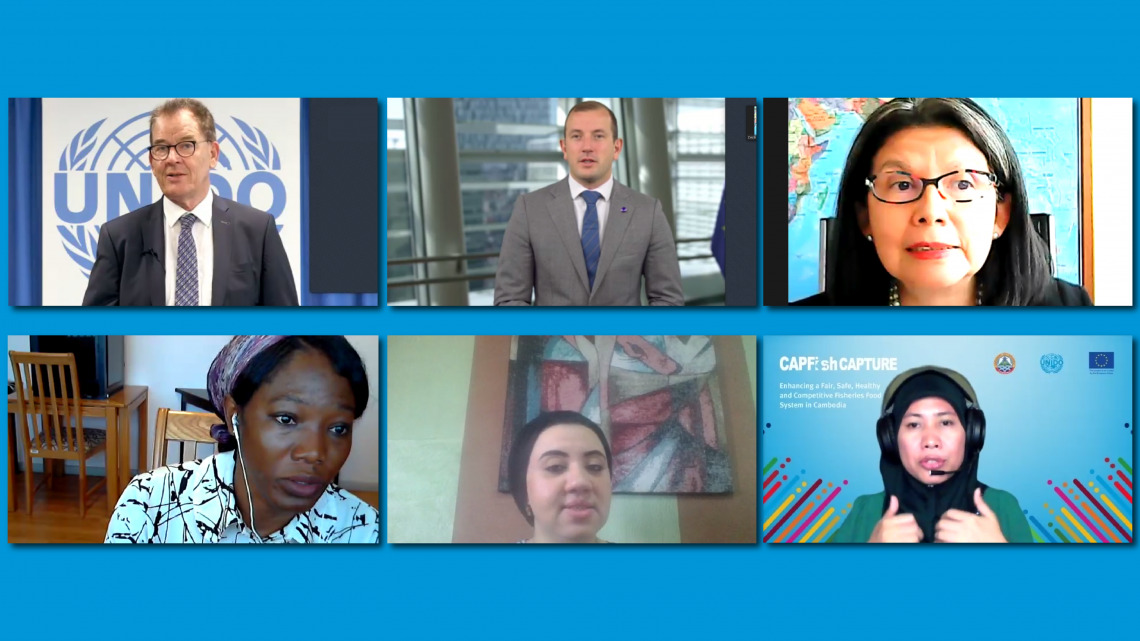 Ensuring that women and girls equally lead, participate in and benefit from environmental action are key priorities for the European Union (EU) and the United Nations Industrial Development Organization (UNIDO). Speaking at an event held in connection with the Stockholm+50 conference, three women who participate in EU-UNIDO projects around the world told their stories.

Opening the event, Gerd Müller, UNIDO Director General, and Virginijus Sinkevičius, European Commissioner for Environment, Oceans and Fisheries, both underlined that a healthy planet is impossible if gender inequalities persist. Therefore, women’s voices as leaders of circular economy, climate technologies and environmental preservation must be recognized and amplified.

Three projects from the EU-UNIDO cooperation portfolio were highlighted during the event.

Amira Saber, Member of the Egyptian Parliament and Secretary General of the Foreign Relations Committee, participates in the Parliamentary action on climate and energy project, which helps catalyze greater engagement of women MPs in renewable energy, energy access and sustainable transport issues. She said that “voices of women are not well represented in the issue of climate change, neither as negotiators, nor as policymakers. Through my NGO, which was founded to close the gap between civil society organizations and policymakers, we’ve been helping with many trainings to build the capacity of women-led organizations, to train women, to give them data and to help implement their projects on the ground.”

She continued, “I want all the women figures in senior policymaking who are influential in their countries and in their surroundings to understand and to stand very solid on the importance of the critical issues, which we’re talking about: climate change.”

Lep Mary, a Cambodian business owner, is part of the CAPFISH project, which supports the Cambodian government’s efforts to achieve sustainable development, climate resilience and inclusivity of the country’s freshwater and marine fisheries resources. Mary noted that “with the support of the UNIDO-CAPFish project, we are able to address most of our challenges related to food safety compliance while enhancing capacity of our suppliers along the value chain on food safety practices. The support will also help to improve environment plans regarding waste management and the safety of workers.”

The event was organized by UNIDO and the EU in association with the Stockholm+50 conference, which commemorates the 1972 UN Conference on the Human Environment and celebrates 50 years of global environmental action. It was moderated by Cecilia Ugaz Estrada, Director of UNIDO’s Office for Gender Equality and Empowerment of Women.