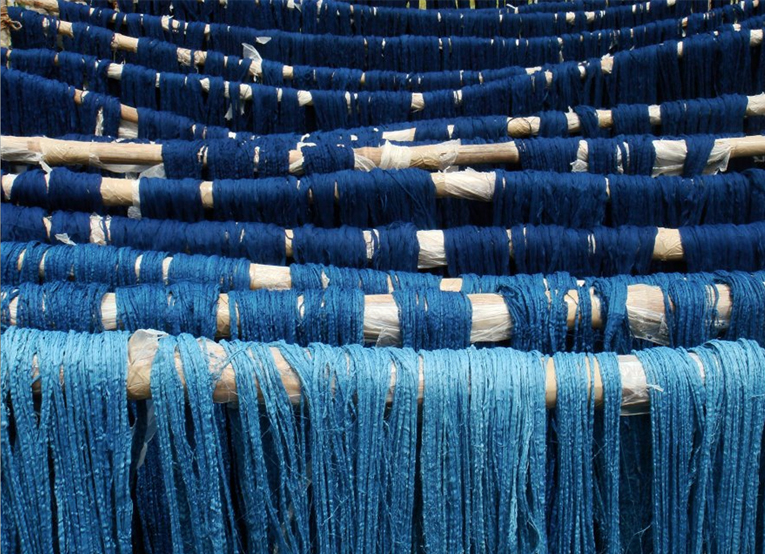 Indigo is known as the trademark color of denim that makes blue jeans blue. There is a symbiotic relationship between denim and blue. Denim is a strong durable fabric, usually, a 3/1 warp-faced twill in which the warp yarns are dyed but the weft yarns are not dyed. Denim fabric is naturally white but a large percentage of denim jeans are dyed from indigo dye. Indigo is probably one of the most widely used oldest dyes of all time.  In fact, denim jeans material is still dyed using indigo dye as it can produce bright blue shades with the desired wash-down effect. 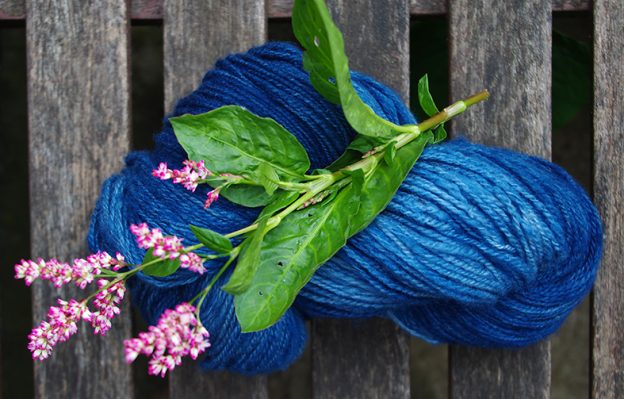 Centuries ago this mysterious dye could only be afforded by royalty and the aristocracy, but today indigo dyed garments have become an integral part of everyone’s wardrobe. Archaeologists have traced the use of indigo to 6,000 years ago. The oldest dye has been used to dye cloth for thousands of years, dating back to ancient Egyptian, Mayan, Indian, West African, and Japanese cultures. There are many plants native to different countries that can produce indigo. Until the mid-19th century, the Indigofera plant, originating from the central and southern   Americas, was one of the most popular choices used for dyeing cloth. Levi Strauss patented the first pair of denim jeans in 1837 in San Francisco, USA, using natural indigo dye to create the iconic blue jeans that are still popular today. In addition, German scientists succeeded in determining the structure of indigo and the way to produce it synthetically.

Why is indigo dye used for denim? 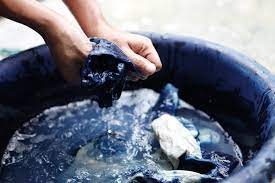 Denim is made of 100% cotton. Blue, vat, direct, sulfur, reactive, pigment dyes etc are used to dye denim. In the last decade, denim was mainly dyed with indigo (67%), sulfur black (26%) and other sulfur colors (6%). Indigo dye is the most popular dyes used for denim production. The Indigo dye is different from others because of some unique properties. As there is no other dye that produces such an intense blue color with so few carbon atoms in its molecules, the dye imparts a brilliant blue hue to the fabric, indigo is unique in its ability to impart surface color to cotton fibers. It also helps give the denim fabric its ultimate worn look with various washing and finishing applications. Indigo’s technical properties include the possibility of dyeing at room temperature, choice of shades from black to navy to sky blue that are neither too bright nor too dull, does not bond firmly to the fiber and retains freshness through repeated washing. Indigo dyed denim is also safe for health. In fact, indigo is also used as a food coloring and medical indicator.

Rope dyeing: is considered the best method for dyeing denim where threads of denim yarn are initially twisted into a rope, then quickly dipped in an indigo bath and oxidized. The more often it is dipped and oxidized the stronger the shade of indigo. The immersion and oxidation time in this process is quite long.  Also its production cost is high. This method does not allow the indigo to fully penetrate the fiber resulting in ring-dyed yarns which are better than fully dyed yarns. Some of the significant advantages of this type of dyeing are high productivity and production flexibility, no cross-shade variation, versatility in denim production, little thread wastage etc. 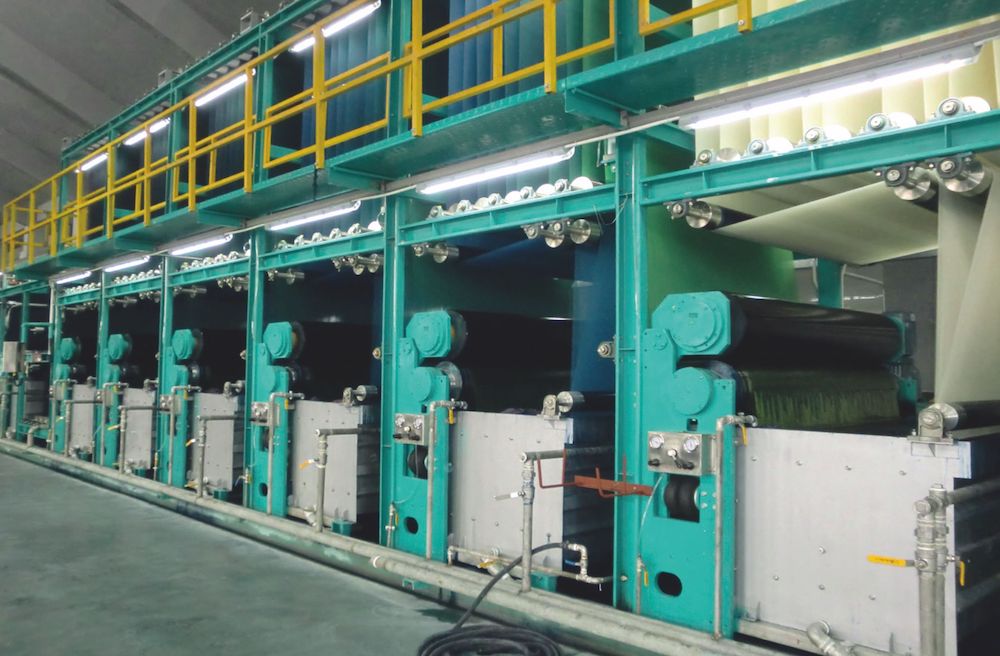 Slasher dyeing: is the pre-treatment of denim yarn, where the primary compartment in warp sheet form is followed by multi dip/nip indigo dyeing.  The warp sheet is instantly processed and taken to the weaving section to convert it into fabric, there is very little yarn handling.  It is a single process that combines dyeing and sizing. In this dyeing the dye does not penetrate well and the color tends to be uneven so slasher dyeing is considered inferior to rope dyeing.  However, recent mechanical improvements have helped make it a more viable option. This process is continuous and production cost is modest.  Also, due to the compact design, less room is required.

Loop dyeing: was the first method for dyeing denim. It is almost like slasher dyeing but with only one dye bath. Loop dyeing takes up less space than other dyeing methods and produces a consistent indigo color. It involves pulling yarn ropes through a vat of indigo dye to the roof of the factory, where the yarn is oxidized before returning to the dye bath. This dyeing is used for warp yarn. The warp sheet rotates in a closed circuit fashion like a loop. Multiple dips and layered skiing are used here. The air is oxidized after each dip. Due to the significant drop in dye and chemical concentration after each dip immediate fortification of the bath is essential to obtain relevant results.

Synthetic indigo dye decomposes very slowly which causes a huge amount of pollution. Workers in the textile industry who are directly involved in the indigo dyeing process suffer from many skin, eye and lung problems. Rivers near denim mills are run blue which disables plants from photosynthesis and pollutes rivers and groundwater. As a result the water lacks oxygen which leads to suffocation of aquatic animals. Such toxic chemicals poison marine life and surrounding organisms contaminate and kill fish and affect the health of workers and residents. Indigo dye synthesis requires several toxic chemicals which pollute ecosystems. Toxic substances and heavy metals that enter rivers and groundwater can enter plants and seafood, posing health risks up the food chain.

The textile industry is known to be the most significant source of pollution in the world. As the world’s population skyrocketed in the 20th century, the need for mass-produced textiles made an already bad pollution problem worse. That’s why researchers at the University of Georgia have developed a new eco-friendly indigo dyeing technology that streamlines the process of dyeing jeans and produces more color than traditional methods. This technology also reduces water usage and eliminates toxic chemicals. The denim industry uses 45,000 tons of synthetic blue annually, along with 84,000 tons of sodium hydrosulfite as a reducing agent and 53,000 tons of lye. The new coloring method, published in the journal Green Chemistry, eliminates the use of harmful chemicals used in conventional methods. Only one coat of blue is required to secure more than 90% of the color which remarkably reduces the amount of water required to dye the fabric. Conventional methods require up to eight dips in the dye solution, which only preserves 70% to 80%. Due to the streamlined process of the new method, it eliminates the need for multiple dips and oxidation time between each dip, saving workers time, energy and maintaining fabric flexibility.

4) What is indigo? Denim FAQ answered by Denimhunters

5) Textile Insight: Dyes used for denim and why does Indigo is so popular for Denim?