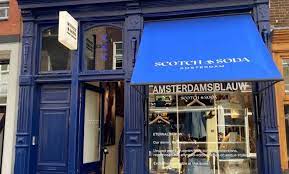 Scotch & Soda’s Amsterdam Blauve denim store has just got a circular update, situated at 15 Berenstraat in the heart of Amsterdam’s historic center. The location is now home to the Dutch apparel brand’s first upcycled denim capsule and denim repair service.

The collection, Eternal Blau, will be sold exclusively at the Berenstraat location and includes 99 hand-numbered garments across the men’s, women’s and unisex categories. Scotch & Soda worked with denim supplier Denim Village to upcycle existing pieces into new fabrics with twist-off shank buttons and embroidered rivets that will help recyclables at the end of their lifecycle. Additionally, unused leather patches from previous collections were incorporated into the design and reprinted with the Eternal Blau logo.

The store is also taking notes from other eco-conscious brands such as Nudie Jeans and offering denim repair through Blau Repair, a service that is exclusive to the Amsterdam Blau Denim store. The repairs are offered in association with United Repair Centre, an initiative of Makers Unite, an Amsterdam-based textile manufacturing company, which provides training and employment opportunities to creative newcomers from expatriate backgrounds. Through the repair program, customers will get their Amsterdam Blau jeans repaired with a turnaround time of seven business days.

Equipped with new design elements such as a storefront neon sign depicting the words “Amsterdam Blvd”, new fitting rooms with denim curtains and a blue rug, and an updated graphic on the transom window, the store centers on the brand’s premium denim line, Amsterdam Blau.

The brand’s latest circular-focused partnership with the House of Denim Foundation is also on display at the store, a non-profit organization that helps inspire denim stakeholders to build a more sustainable, ethical industry. This organization is behind Jean School, an education program for denim development. As part of the partnership, students at the Jean School used Scotch and Soda Denim fabrics and trims to create the Denim Laptop Case and other creations, exclusively for sale at the store.

Scotch & Soda’s emphasis on circularity is an extension of the signing of the Dutch Denim Deal, an initiative that calls for a new industry standard to use 5 percent post-consumer recycled cotton in the production of all denim clothing. The brand was one of 40 signatories to the public-private initiative, which was set up by the Dutch government in October 2020.

The retail updates build on the brand’s aggressive brick and mortar expansion plans, which include opening 20 global stores in just six months. Stores include prime locations in Milan’s Via Alessandro and London’s Long Acre – the most popular fashion destinations in both cities, as well as additional sites in North America, Europe, China, the Middle East and Asia. Last year, the brand embarked on a mission to bring its physical presence to 249 stores and 280 shop-in-shops before 2022.