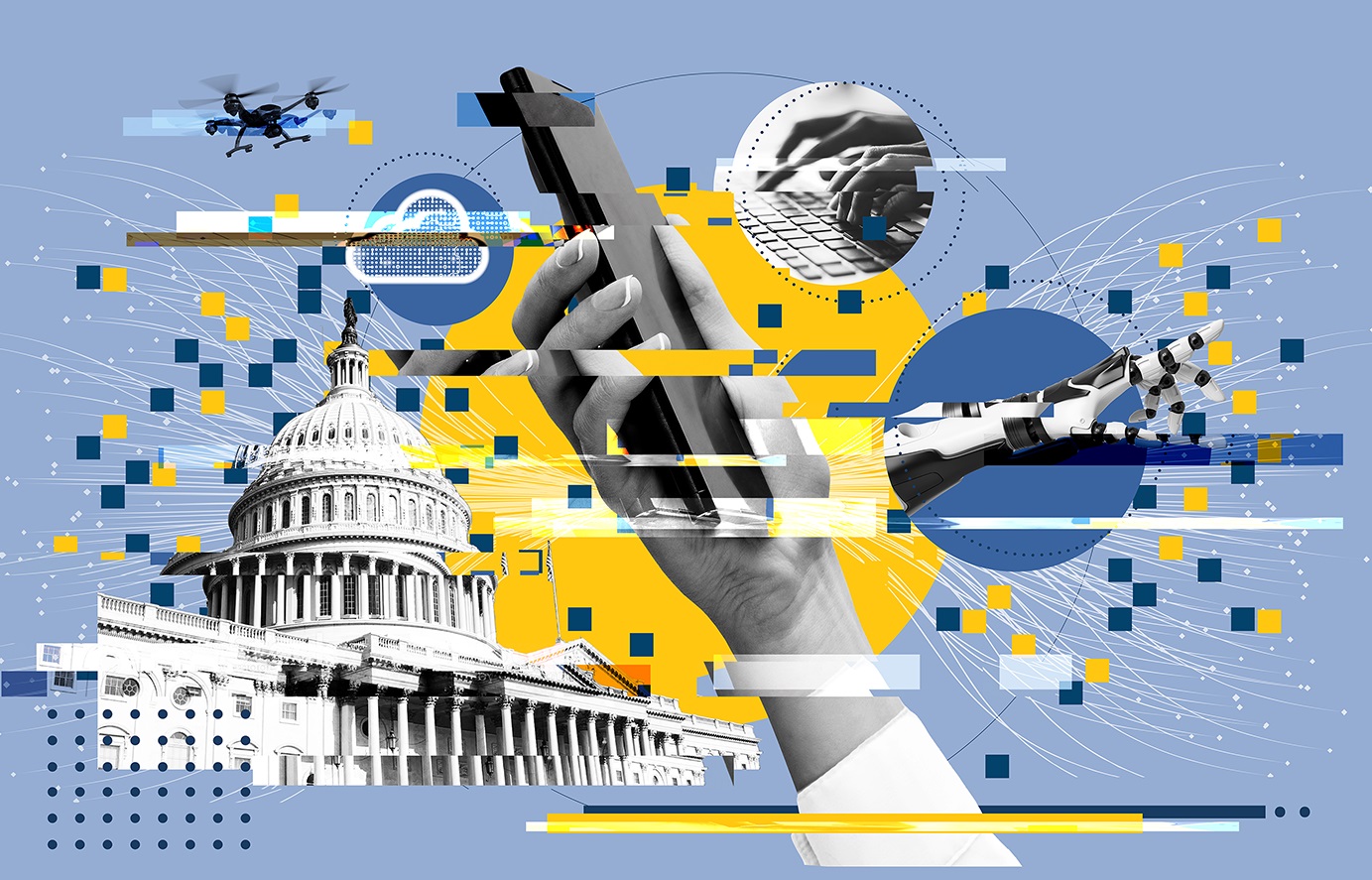 Bangladesh has maintained consistent macroeconomic development through prudent economic management over the last decades. The economy witnessed 6% plus average growth over the past decade until the pandemic hits. The economy recovered with 6.94% growth in 2021 while most of the developed and developing peers recorded negative. The economy sustained and availed 7.25% growth with $2824 per capita income in FY2022 based on the interim macro economic report while the world is struggling with inflation and post-pandemic transition. Bangladesh has become the 5th top resilient economy globally during the pandemic time. With the extraordinary economic performance, Bangladesh sets to graduate into a developing economy by 2026 and a developed economy by 2041. Witnessing the economic spree, the UN considered Bangladesh as the role model of development for LDCs. PWC, HSBC, and CEBR, UK projected a paradigm shift for Bangladesh by 2030. IMF forecast Bangladesh will surpass many developing economies like Singapore, Denmark, Netherlands by 2025 in terms of GDP.

Bangladesh, geographically located at the intersection between South Asia and Southeast Asia, occupies a strategic position geographically in the Indo-Pacific region with the scope of expansion to Europe. This position and connectivity access create the potential for Bangladesh to get connected with regional economies deeper. The long-held foreign policy, friendship to all malice to none, helped us to maintain our economic survival and friendly diplomatic tie with almost all countries globally as a tested friend since independence. Such a precedent of foreign policy is rarely practiced in the complex global situation. The geopolitical and strategic relations often change due to individualistic and regional economic dominance and interests. Sustainable economic cooperation has become very indefinite and shared interests are getting the least priority. Transport connectivity is fundamental to any regional integration process for reaping the benefits of trade, investment, and progress in tourism, skills, technology transfer, people-to-people contact, and cultural exchange. Recently, digital connectivity has emerged as another pivotal mode of connectivity due to the emergence of digitisation globally.

Despite having huge scopes to be well connected regionally, Bangladesh is not largely connected to all regional and economic hubs infrastructurally both soft and hard to realize the utmost economic benefits. The forging of economic advancement and transformation requires close integration of Bangladesh and other economies. Realizing the importance of inevitable integration, once Bangladesh agreed to the Look East Policy considering far-reaching economic implications but progress has not been remarkable though this turned into an Act East policy. Our limited integration orientation has kept our engagement limited to SAARC. The limited economic and political dominance of Bangladesh kept our integration with SAARC relatively weak.

But, our recent economic emergence as the highest growth performing nation in South Asia and proactive role in regional and global trading systems amidst the pandemic attracted global attention. Economic operation plays a critical role in steering potential connectivity in terms of investment, industrialization, and trade growth. Connectivity benefits economic mobility. The strategic location of Bangladesh and connectivity privilege are apparent dividends to expanding trade and investment networks beyond Asia. Foreign investors from Europe and the USA intending to tap regional markets can prefer Bangladesh for translating the potential of regional markets due to the scope for multimodal communication access. Bangladesh is going to graduate into a developing country in 2026 which will cease our wide-ranging trade support measures including preferential tariffs from major trading partners and that demand market diversification with regional concentration. The connectivity can offset more non-tariff barriers making the regional trade competitive. Amidst the changing geo-economic context, economic relations nature is very flexible. Due to frequent turns and twists in the global arena, trade diplomacy has emerged as a pressing tool considering the economic orientation and deep-rooted engagements across the continents. Our policy leaders felt the urgency of economic diplomacy in the competitive world economy for our mighty and strategic economic sustenance. We believe industrialization and infrastructure are pressing for the progressive economic journey of Bangladesh. Government underscores various critical infrastructure projects. 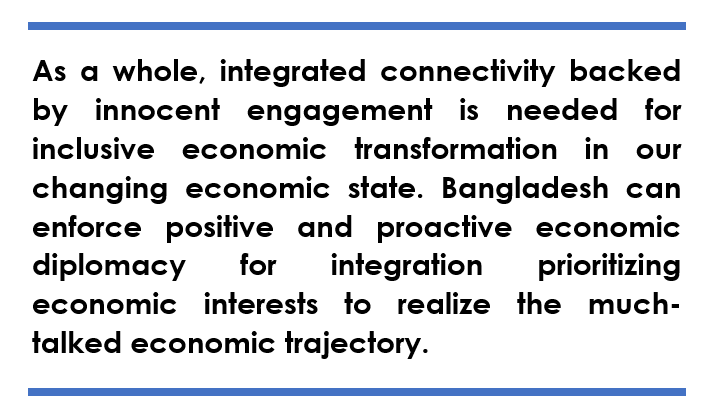 ASEAN engagement for Regional Comprehensive Economic Partnership (RCEP), the largest economic bloc worth over $3 trillion is critical in this regard. Alongside, BIMSTEC transport connectivity and BBIN MVA can be established to enhance trade but lack consensus. Japan led the BIG-B initiative in the economic growth of the region encompassing covers vast geographical area extending from Myanmar, Bangladesh, India, and the Indian Ocean Rim. Bangladesh could turn into a nodal point of regional growth and Japanese investment concentration taking into account the advantage of the maritime route and privilege. One belt one Route (OBOR) is the most significant global infrastructure initiative that links the connectivity of Asian, European, and African continents contributing 80% of global GDP by 2050. Around 136 countries signed BRI including Bangladesh. US$ 40 billion infrastructure investment promise to facilitate our connectivity took a slow course. Bangladesh once agreed to join the Asian Highway (AH) routes that connect road and rail links among BCIM countries but this has not been implemented yet. BCIM is one of 6 corridors of OBOR and other routes like the China-Central Asia-West Asia (CAWA) Economic Corridor, and China-Indochina Peninsula (ICP) Economic Corridor are benefitting these regions. Taking the aggregate benefits of these connectivity moves, our transport network needs robust development through our national road network is not at par regional standard, and Dhaka and Chittagong transport route is getting priority considering port-led trade scopes and other untapped connectivity options. The route seems vital for scopes with BIMSTEC and BIG-B and BCIM. The government has undertaken various exclusive infrastructure development projects including highways. Bangladesh has merely an 18% share in the Asia Pacific region in foreign trade. This indicates either we fail to secure the regional market or we have non-tariff barriers including connective utilizations. The surface transport networks in the North-Eastern states are still fragmented due to various political and economic reasons. Despite having a huge trade advantage and time-efficient connectivity the with north-eastern states of India, Bangladesh has a limited degree of export access. SASEC shares a common vision of boosting intraregional trade and cooperation in South Asia by developing trade connectivity with Southeast Asia through Myanmar for stronger regional and global market access. If harnessed, it could be the vehicle that arbalests the SASEC subregion into one of the fastest-growing economic blocs. But, the rapid change in political orientation, alignment, and division causes various concerns. SAARC is a dead horse as political mistrust and faction among members are high which degrade all potentials, as a result, the connectivity prospect has been overshadowed and potential trade of $100 billion remains largely unutilized. Bangladesh needs to increase the infrastructure investment to GDP ratio to a minimum of 5% likewise regional economies equip local communication networks aiming at regional communication network improvement. Connectivity-backed solidarity is critical for trade and economic cooperation. The territorial dispute between India and China and India and Pakistan has some extent destabilized regional harmony. The Rohingya infiltration and repatriation issue may skew our economic integration and consensus. Frequent shifts and positions in regional blocs of peer economies require thoughtful decisions for us. Therefore, G2G consensus and warm and friendly diplomatic moves are required to ensure multilateral connectivity. Bangladesh keeps maintaining a friendly diplomatic tie with all countries through a tumultuous geo-economic wave rather than being sandwiched between unwritten China and the US-led cold war. We must consider learning about regional trade and political dynamics and our economic strength prior to any concrete decision. As a whole, integrated connectivity backed by innocent engagement is needed for inclusive economic transformation in our changing economic state. Bangladesh can enforce positive and proactive economic diplomacy for integration prioritizing economic interests to realize the much-talked economic trajectory.