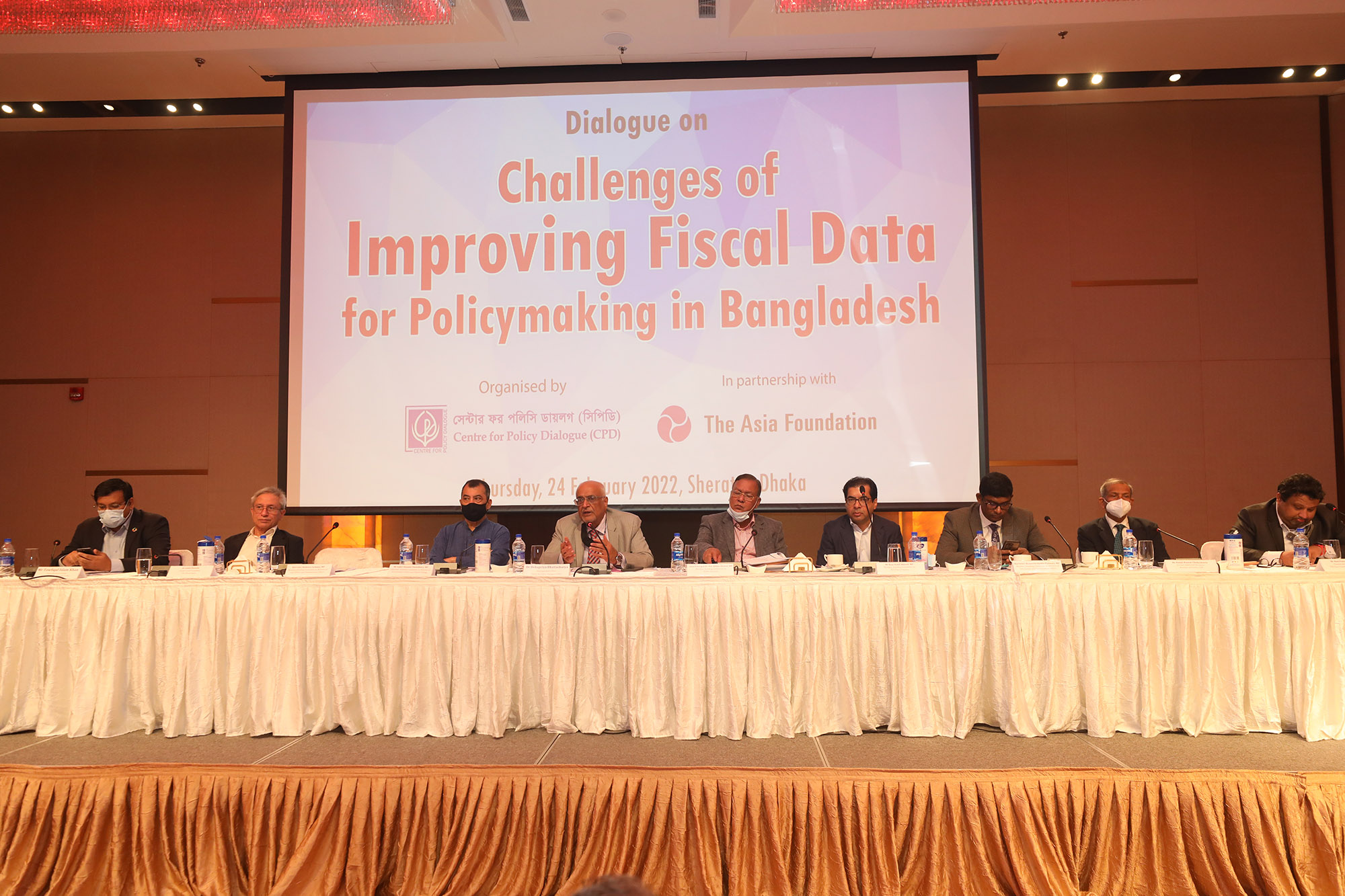 To bring forth the much-required improvement, there is a need for a big push from the demand side, particularly on the part of policymakers, including the elected public representatives. At present, this charge is being led by the data analysts. It was further stated that the improvement in the area of fiscal data would require considerable political will and a change in the mindsets of core actors. Political incentives shall need to be created to bring such changes. It has to be realised that the timely disclosure of accurate fiscal data can only improve the implementation of the national budget and attainment of the national development objectives.

These observations emerged at the dialogue titled ‘Challenges of Improving Fiscal Data for Policymaking in Bangladesh’. The dialogue was organised by the Centre for Policy Dialogue (CPD) in partnership with The Asia Foundation – Bangladesh on Thursday, 24 February 2022, at the Sheraton Banani, Dhaka.

Dr Debapriya Bhattacharya, Study Team Leader and Distinguished Fellow, Centre for Policy Dialogue (CPD), Chaired the session. In his remarks, he reemphasised that fiscal data has a critical role not only from the perspectives of accountability and transparency for the development process of the country but also for policymaking. The prevailing dearth of timely delivery of quality fiscal data as per the demand may have emerged from several sources, including lack of awareness, capacity, urgency for sustainability, and absence of procedure and application. He opined that a political stimulus would be required to bring positive changes to this end.

The keynote presentation at the dialogue was delivered by Mr Towfiqul Islam Khan, Senior Research Fellow, CPD based on a recent study conducted by the CPD research team. The study explores ways and means to improve accountability, ensure good governance and support budgetary decision making in the country through timely disclosure of quality fiscal data. The study urged to report actual expenditure on social protection and subsidies, and transfers should be reported on a monthly basis as well as project-wise ADP expenditure. The study also apprehended that it may be possible that due to a lack of availability of timely fiscal data, the government could not adequately utilise the available fiscal space. As a result, the government may be forced to pursue a relatively conservative attitude in extending budgetary allocations for cash transfer and subsidy to combat the COVID-19 pandemic and rising commodity prices.

The presentation focused on four fundamental dimensions of fiscal data: availability, accessibility, agility (promptness), and accuracy. In terms of ‘availability’, the major concerns begin with the absence of several key fiscal indicators, followed by inadequate levels of disaggregation. The degree of ‘access’ becomes limited when certain documents are not available on public domains or are provided in a non-user-friendly manner. In the case of ‘agility’, the persistent issue remains to be the timeliness of reporting. Finally, the major concern as regards the ‘accuracy’ of fiscal data continues to be the see inconsistency amongst the data provided by national data suppliers.

Professor Rehman Sobhan, Chairman, CPD shared special remarks at the dialogue. He hypothesised that the quality of data would be maintained if the generated data is derived from the needs of the primary data users, i.e., policymakers. However, the majority of demand for change in data quality comes from outside the government, which is a critical weakness as the driver of change should be from within the government.

Vice Principal Dr Md. Abdus Shahid, MP, Member, Parliamentary Standing Committee on Public Accounts, underscore the fact that only data driven decisions can make policymaking more transparent. The government is carrying out many activities, but often they are not reflected in data.

The issues and challenges are not about fiscal data but rather about statistical data, stated by Mr Saber Hossain Chowdhury, MP, Chairman, Parliamentary Standing Committee on Ministry of Environment, Forest and Climate Change and Member, Parliamentary Standing Committee on Ministry of Planning. He also added that data revolution is a key prerequisite for achieving sustainable development goals. Data accessibility and transparency have always been lacking from the government end. The data producers either do not want to share or don’t have a systematic way of data collection. As elected representatives of the citizens, the MPs need to have access and take cognisance of data so that they can provide more useful and precise opinions and solutions.

Mr Kazi Nabil Ahmed, MP, Member, Parliamentary Standing Committee on Ministry of Finance, mentioned that over the last two years of the pandemic, the main priority of the national budget had been the health sector. Data on the vaccination process has been collected at the upazila level from district health offices and disseminated every three months. However, we don’t have a complete breakdown for cross-analysis. The government’s main strength is the people, and the people should be able to assist in generating data.

For Bangladesh, data terrorism has emerged as one of the main challenges, mentioned by Mr Shameem Haider Patwary, MP, Member, Parliamentary Standing Committee on Ministry of Law, Justice and Parliamentary Affairs. The story told by data often is not reflective of the actual scenario. More focus should be put on achievement-based indicators. There is also an acceptability issue regarding data amongst politicians. Data related issues cannot be solved without acceptability. He suggests think tanks such as CPD should train MPs in data studies for crucial matters such as budget formulation.

Dr Zahid Hussain, Former Lead Economist, The World Bank, was present as a Distinguished Discussant and mentioned that data regarding state-owned enterprise is crucial and reformation is needed in this regard. Moving forward will include providing a calendar for data release as well as for data revision, especially given that data discrepancy is unavoidable. Moreover, providing reports in a PDF format is akin to still maintaining a paper-based system. Therefore, we need to utilise excel based platform to make data not just available but user friendly.

Mr Ranjit Kumar Chakraborty, Former Additional Secretary, Ministry of Finance, said regarding data revisions when a fiscal year closes, the bottom-line data should be unchanged, while there may be some adjustments within three months. The reasons for the discrepancy in data, such as between NBR and CGA, may be a result of when a tax payment is made via pay order; this will show up for NBR as a receipt but not for CGA because the tax payment hasn’t been encashed.

Mr Kazi Faisal Bin Seraj, Country Representative, The Asia Foundation, during his Introductory Remarks, stated that it has become increasingly important to look at Bangladesh’s growth and the efficiency of the growth. This is where data plays a major role. In terms of accountability, if data is made available and accounting is right, then the lending rate may potentially come down. We may even be able to reduce our dependency on foreign funds and even domestic borrowing.