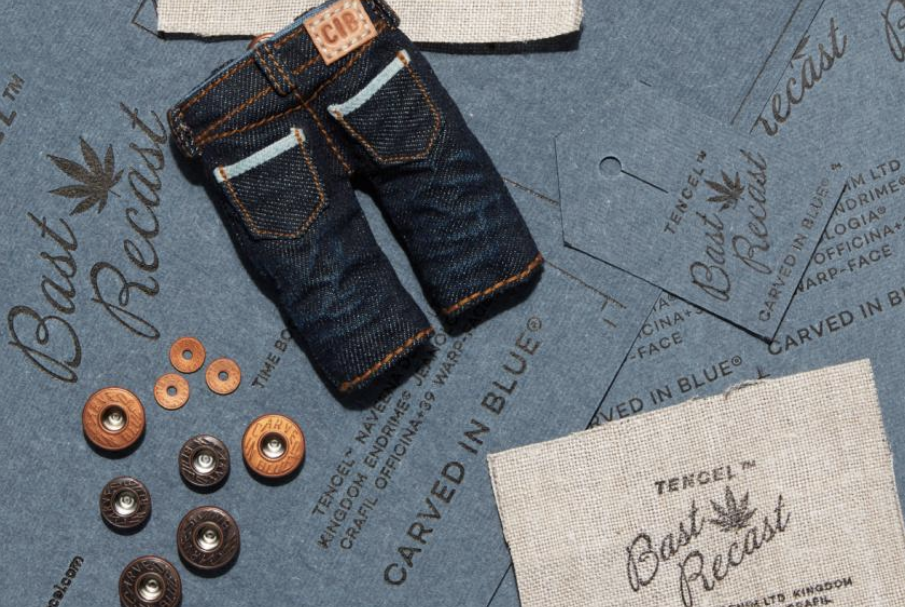 While the collection just debuted in 2021, Bast Recast was set in motion towards the end of 2019 after a meeting in London between Naveena Denim Limited’s (NDL) Rashid Iqbal and Michael Kininmonth from Lenzing.

NDL was showcasing its first hemp based collection, and the idea of adding further to the range with blends of hemp and TENCEL™ was set in motion.

“I knew from work I’d done many years ago that there was a real synergy between blends of TENCEL™ Lyocell and bast fibers,” Michael explained.

“The whole idea behind this project was to merge the latest technologies with vintage denims. Enhancing the aesthetics of hemp with those of TENCEL™ fibers appeared to be a great marriage worth exploring,” said Rashid.

Endrime Design Studio brought their vintage expertise to the collection, with the inspiration coming from the 1840s; paying homage to that history, the collection includes constructions such as duck canvas and workwear silhouettes reminiscent of that early era.

For washing and finishing the project was handed on to Jeanologia. “What an amazing project that we managed to do together, and how very honored I am to have done it, to have been involved from the very beginning,” said Mohsin. “Our friends at Jeanologia did such an awesome job finishing it for us to show off the fabric to the best of its ability whilst at the same time achieving low eco impact scores.”

In the past five years, Brazil has increased cotton exports to the Chinese market by more than 15 times. In the 2016/17 crop, 41.8 thousand tonnes were sold. In the current 2020/21 cycle, which ends in June, 643.1 thousand tons have already been sold – and both the Brazilian Cotton Growers Association (Abrapa) and the China Cotton Association (CCA) are working to keep this pace up in the coming years.

On the night of April 26, the two entities signed a memorandum of understanding that formalized joint efforts to bring the cotton producers associated with Abrapa even closer together with the Chinese textile market gathered under the CCA. Created in 2003, CCA represents about 60% of the textile sector in China, covering several links in the cotton chain, including manufacturing plants. Abrapa, founded in 1999, covers 99% of the cotton production in Brazil and 100% of total exports.