This story is about how small weaving manufacturers in Japan managed to successfully transform their cotton kimono businesses during the phenomenon of the growing popularity of Western clothing in the 1970s, and develop within the Sanbi industrial cluster to become global leaders in the production of high-quality denim and jeans worldwide.

Japanese denim companies are very small but remain competitive due to their quality, compared with Chinese, Mexican, and Turkish companies. Some of these Japanese companies have won the Premier Vision Fabrics Handle Prize, while others have created new denim fabrics, such as soft denim, for luxury brands. According to the data of the Office of Textile and Apparel (OTEXA), as a proportion of sales in 2015 the United States imported most of its blue denim fabric from Japan (28.9 percent), with China in second place (26.2 percent), and Mexico third (17.3 percent); in terms of volume, the United States imported blue denim fabric from China (36.3 percent), with Mexico in second place (24.8 percent), and Japan third (13.5 percent). How was it that Japanese denim companies developed to become such prominent leaders in the field? Most of these companies are clustered geographically, with jeans companies sitting side-by-side with dyeing, processing, and finishing factories. These clusters were originally set up for the production of Kasuri cotton kimono clusters and only shifted into denim and jeans production in the 1970s. This study will shed light on the development process of the denim industry in Japan – focusing on the Sanbi district, the largest denim and jeans cluster – and will examine the success factors in the global market from a historical perspective using primary sources.

The Westernization of Clothing

One success factor is the social and cultural background in Japan. Before the Second World War most people in Japan – male and female, old and young – wore kimonos. A kimono is a traditional Japanese robe that is tied at the waist by a wide belt called an ‘obi’. It has no buttons, zippers, or any other kind of fastening. The shape of the garment is very simple and it has little decoration. A kimono is made from many different types of fabric, including silk, cotton, wool, and linen. The type of fabric defined the kimono’s suitability for different occasions, such as a high-quality silk kimono for ceremonial events and a cotton one for casual wear. The type of fabric also reflected a person’s social position, until the Meiji Restoration in 1868. During this time only the Samurai class could wear silk kimonos, while other social classes wore cotton kimonos. After 1868 people had freedom of choice in clothing, meaning that anyone could wear silk kimonos for weddings and funerals.

Although Western-style clothing had already been introduced to the upper classes by the Japanese government during the Meiji Restoration, after the Second World War, the Japanese lifestyle began to be westernized at an ever-faster pace, particularly in the area of clothing. Along with the high economic growth in the late 1950s and early 1960s, the kimono market shrank and Western fashion became a mass phenomenon in Japan. First came tailor-made clothes for upper-class and upper-middle-class customers; after this, clothing companies rapidly increased their sales, and ready-to-wear clothing soon became common among every generation and income group in the 1970s. Jeans were one example of the clothing that was introduced at this time, and a niche market formed of mainly young customers who lived in urban areas. These young consumers had first seen jeans being worn by Americans from the General Headquarters (GHQ) during the recovery period, and they soon began to identify jeans as a symbol of freedom and individuality. With the increasing demand for jeans, several jeans and denim companies were established in the 1970s to capture this niche market. Since then the denim and jeans market in Japan has developed to specialize in high-quality premium denim and jeans.

The main factor in the success of the Japanese denim and jeans industry is the effective transformation of the whole cluster. Cotton kimonos have a variety of styles based on various dyeing and weaving methods. The ‘Kasuri’ kimono, for example, is a type of cotton kimono that is dyed with indigo, requiring great skill in dyeing and weaving; as a result, it can be very expensive, although this type of cotton kimono is still regarded as casual, everyday clothing. There were three main industrial clusters for Kasuri kimonos in Japan, namely Kurume, Iyo, and Bingo, which had been established around 1800. Among these, Bingo became the largest cluster and produced more mass products than the others in the 1960s. While Kurume and Iyo were striving to innovate a new Kasuri fabric and shifted to the high-end market to cover the decreasing demands for kimonos, the Bingo cluster created mass products more efficiently than before. It continued to increase its sales until 1960 with the improvement of technology, although in the 1970s sales began to decrease rapidly with the huge growth in demand for Western clothing and therefore suffered from the introduction of the new Western clothing. Some silk kimono manufacturers were able to shift their focus to the high-end market for ceremonial occasions due to their special place in Japanese society, However, many cotton kimono manufacturers, particularly those in the Bingo cluster who focused on mass customers, we’re unable to do so, because of the shrinking casual kimono market. This industrial cluster was therefore forced by changing consumer demands to transform the whole nature of its business from the production of traditional cotton Kasuri kimonos to a brand new industry. 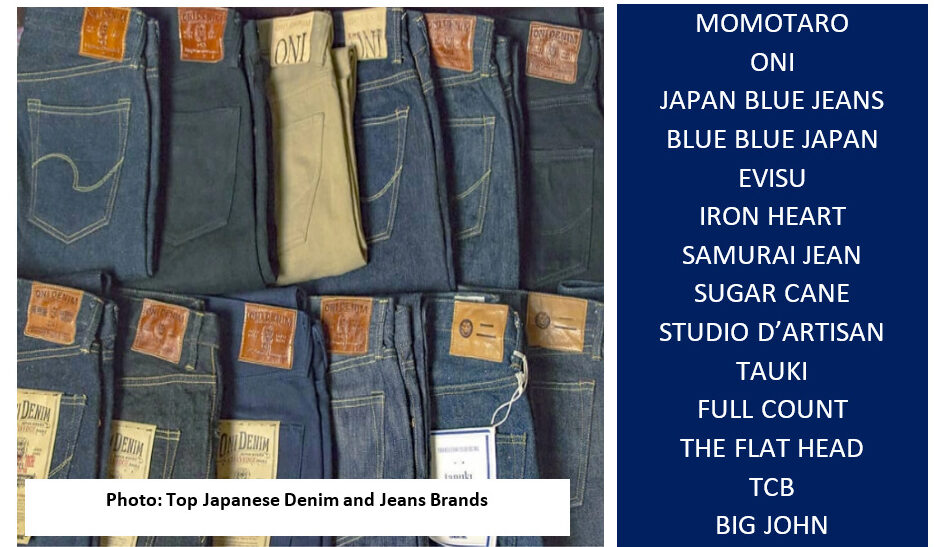 The neighboring clusters of Bingo are Bizen and Bicchu, which were also cotton kimono clusters that used Kasuri fabric. Some manufacturers in Bizen who made kimono accessories started to produce ‘tabi’ (Japanese-style socks) in 1877 and then began sewing Western-style work clothes in the 1910s. In the 1920s many manufacturers in the Bizen cluster started to produce Western-style school uniforms, which became increasingly popular (Fujii et al., 2007). This was a natural transition in terms of finding different uses for the same relevant technology: from the production of cotton fabric to tabi, and from tabi to school uniforms. All these products were made for daily use, and the same cutting and sewing skills for thick textiles that were used to make tabi were directly transferable to the production of work uniforms and school uniforms; by 1937 the Bizen cluster had become the largest producer of school uniforms in Japan.

However, between 1965 and 1970 the demand for school uniforms fell, because the early generation of baby boomers had passed through the school, and competition within each cluster became more intensive with the emergence of newcomers. In order to manage the distribution channel and build a stable production system, large cotton-spinning companies controlled the weaving mills and sewing factories and organized retailers to maintain retail prices. This was a well-known form of management in Japan at the time called ‘Keiretsu’. As a result, those manufacturers who were not working in partnership with any large spinning manufacturers found it very difficult to secure orders and were eventually pushed out of the industry and forced to change the nature of their business. One of these small manufacturers in Bizen was called Big John, which had been established in 1940 to produce school uniforms. After transforming its business, it started to sew the first ‘made in Japan’ jeans using imported American denim in 1967, and later using Japanese denim in 1972 (Sugiyama, 2009). Its great success encouraged many of its surrounding manufacturers to join this emerging field, which resulted in the establishment of a whole new denim and jeans industry that spread across Bizen, Bingo, and Bicchu to the point where these three districts became collectively known as ‘Sanbi’ in Japanese.

The Successful Transformation of Industrial Clusters

New technology for producing denim and jeans was brought to Japan from the United States. Many denim companies started out as producers of Kasuri fabric and shifted to denim production in the 1960s and 1970s, using their existing skills and technology to make this transition. Although it was a natural path to take considering the change in consumer demand and the fact that both Kasuri fabric and jeans were dyed by indigo, there were many challenges involved in adapting to this change. Rope dyeing was the biggest hurdle that these manufacturers had to face, but they managed to learn the technique by reverse engineering American-made jeans and relying on their skills in indigo dyeing and sewing thick textiles. Making a success of this transition from a cotton kimono cluster into a denim and jeans cluster was the only way that these businesses could survive the huge growth in the popularity of Western clothing in Japan. This whole transformational process was led by small, lesser-known manufacturers rather than by larger ones. As one of the major businesses in the Kasuri cluster in Japan, Bingo catered to the mass market but was hardest hit by the introduction of Western clothing, as it was more difficult for its business model to adjust to westernization. Bizen, however, managed to shift to the production of Western clothing at an early stage, focusing on uniforms – and it was the dropout factories from the uniform industry that eventually became the driving force behind the emergence of the jeans industry. The resulting success of the Japanese denim business model then spread out across the cluster, which today enjoys an enhanced competitive advantage in the global market.

2.     Competitiveness of the Japanese denim and jeans industry: The cases of Kaihara and Japan Blue, 1970–2015