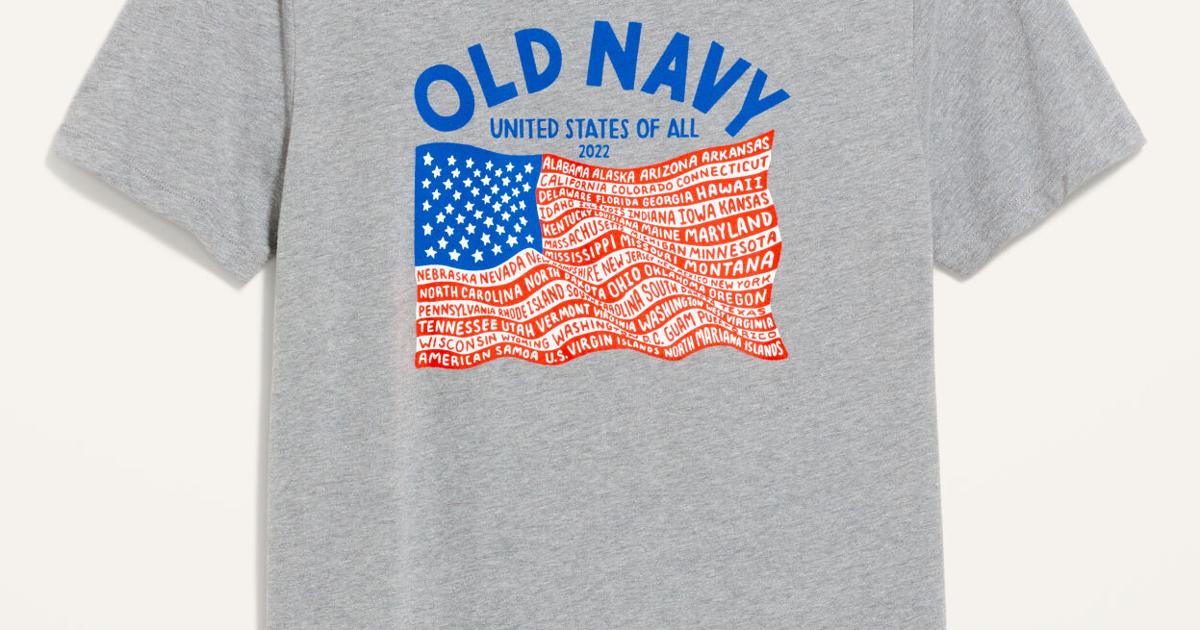 For the first time ever, Old Navy is expanding upon its traditional Flag Tee collection to offer customers the most inclusive assortment yet. The brand will provide three new Flag Tee designs, co-created with artists Manuela Guillén, Monica Ahanonu and Edward Granger, alongside its classic Flag Tee graphic – designed in-house every year since the company was founded in 1994.

For 28 years, Old Navy’s Flag Tees have served as an integral part of family summer celebrations, becoming a cult-favorite for millions across the country. While many Americans wave the American flag with enthusiasm, younger people feel less represented by its symbolism than older generations; only 56% of adults under the age of 35 said the flag made them proud.[1] This year, Old Navy is inviting all customers to celebrate America’s birthday with a range of Flag Tee designs that offer modern interpretations of the stars-and-stripes.

Old Navy partnered with three of its previous Project WE artists[2] to design a new range of Flag Tees that speak to more Americans. Each tee represents the artists’ unique vision of the country.

Manuela Guillén, a first-generation American artist to Cuban and Salvadoran immigrant parents, designed the first-ever Spanish language Flag Tee for Old Navy. Her design features the phrase “para todos,” which translates to “for all,” to reflect her belief that the flag symbolizes inclusion for all who wish to call the U.S. home.

“America is for everyone, no matter what. This place is for all of us. That’s from my heart,” said Guillén.

Los Angeles-based model and artist Monica Ahanonu’s Flag Tee represents the intersectionality of her identity as a Black woman and an American citizen. Her design titled “An American Tradition” conveys her perception of what the flag embodies: courage, bravery and optimism.

“In America, you have the opportunity to create the future you dream of, whatever it may be,” said Ahanonu.

Artist and LGTBQ+ advocate Edward Granger infused his signature geometric technique into his Flag Tee design to give the timeless symbol a more modern and abstract feel. To Granger, the flag represents innovation and freedom, a belief instilled at a young age and one that fuels his creative drive today.

“Being American is to be open minded and welcoming to all. We’re in the dream together,” said Granger.

Old Navy’s 2022 Flag Tee is an evolution of last year’s updated design, again featuring the names of the five U.S. territories in addition to the 50 states. Accompanying the flag is the new phrase “United States of All,” driving home the brand’s commitment to unity and belonging.

The 2022 Flag Tee Collection, inclusive of the three Project WE designs, is available for the family now at www.oldnavy.com and in all U.S. stores.

As an iconic American brand, Old Navy is dedicated to representing the diverse voices that make up the U.S.A., as seen through its summer “Created by America” campaign. To craft this inclusive campaign, Old Navy tapped varied communities – from young teens and high school art students, to influencers and Reddit users – to discuss what it means to be American. The brand infused these perspectives into a fresh Fourth of July digital and social campaign that reflects the complexity of American identity.

Old Navy is continuing to co-create with customers through its “Written by the Internet” television campaign. The summer spot marks the second installment of the brand’s collaborative creative concept which is scripted entirely by social media comments. The summer spot features a cameo with comedian and longtime Old Navy superfan Heather McMahan, who was voted in by America when multiple users requested she be part of the ad. Created by The Martin Agency, the commercial features Old Navy’s elevated Americana and summer styles for the family.